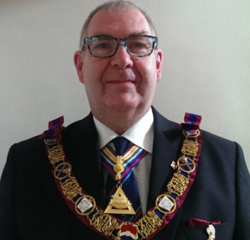 Born in Kentish Town, London on 16th July 1954 Roy married his wife, Lorraine, in 1981. They have two daughters and four grandchildren.

Initiated into Royston Lodge 4304 in 1991 he soon found that Freemasonry had a profound and positive effect on him, giving his life a new dimension and enabling him to interact with a diverse group of people sharing a common vision. In the Craft he is a member of two other Lodges in the Province – Installed Masters 4090 & Provincial Grand Stewards 8984 – and one in London, Pegasus 2205. Appointed to ProvGStwd in 2008 Roy was promoted to ProvGSupWks in 2013.

It was in January 1994 that Roy began his Mark career by being advanced into Royston Lodge of Mark Master Masons 1489. A Provincial appointment to ProvGSwdB followed in 2003 with promotions to ProvAGDC in 2004, ProvDepGDC in 2009 and ProvGDC in 2012. His first appointment to Mark Grand Rank, as PAGDC, was in 2008 before being promoted to active GSD in 2014. He is a member of 6 other Mark Lodges in this Province and 2 outside of it.

In the Royal Arch he was exalted into Royston Chapter 4304 in 1995 and currently holds the rank of ProvAGSoj. He is also a member of the First Principals Chapter 4090.

As if the above were not enough involvement in Freemasonry he is also in Rose Croix, Royal and Select Masters and the Worshipful Society of Freemasons (the Operatives).

Not yet retired Roy, having trained as a Service Technician, now trades in partnership with his eldest daughter, Louise, and son-in-law, Leigh, as ‘Absolute Oil Services’ – installing, servicing and commissioning oil-fired boilers.

In his free time he quotes his hobbies as including cooking (especially oriental dishes), fishing, travelling the world, growing orchids from seed and D-I-Y.