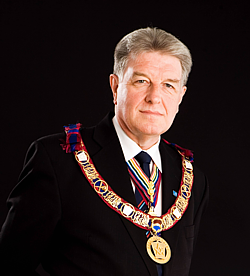 Chris was born on the 11th October 1947 in Hammersmith, London.

He is married to Brenda with 2 sons and lives in Chrishall (between Saffron Walden and Royston) since 1984. [This was also the village in which Godfrey Kent lived]

He was a Research Assistant to Rt Hon Sir Geoffrey Pattie (then MP for Chertsey & Walton) from 1975 to 1979 and part time Masonic Assistant & Project Manager to VW Bro Robert Morrow, Grand Secretary, 2001 to 2006 (fully retired)

In July 2014 Chris was promoted to membership of the GMRAC (Grand Masters Royal Ark Council ).

He lists his hobbies as: