The Norfolk Lodge is the new main accommodation unit at the Tolmer’s Scout Activity Centre in Cuffley, to which the Mark Master Masons of the Province of Hertfordshire donated the sum of £10,000 in April 2013.

The donation has allowed the site’s widespread complexes to be connected in a “ring main” of power, lighting, gas, water, drainage, sewage outlets and even an Internet access to each complex.

The Warden and staff have used the donation very wisely and because they have dug the necessary trenches and laid everything at the same time, it saved money that was spent refurbishing the lodge, which will become operational on 1st of March 2012. The naming of the building is scheduled for early April and our donation will be acknowledged by the strategic placing of a plaque and an invitation to the naming ceremony.

Tolmers Scout Activity Centre Warden, Chris Rainbow, along with the County Commissioner, Rikki Harrington,  greeted the Provincial Grand Master, R.W. Bro Chris Radmore and his wife Brenda and other members of the Executive on Saturday 31st of March at their centre in Cuffley, for a plaque unveiling ceremony in acknowledgement of the £10,000 donation made in July 2013. Other sponsors were also present and were thanked for their donations.

Astonishing facts emerged also of how successful the “Norfolk Lodge” had become in such a short period of time since its completion.

The first booking was for the 3rd of February and so far 5 groups have enjoyed a weekend stay there. Currently the centre has only 7 weekends left available to book the Norfolk Lodge this year, out of a possible 47 weeks available to hire. 5 bookings have already been taken for 2013.

These are some of the views of the Lodge and dignitaries. 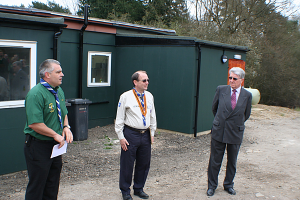 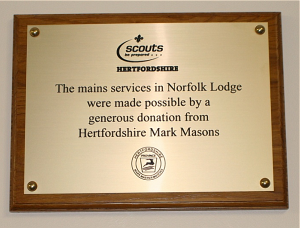 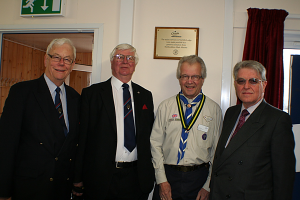 Since reporting to the Hertfordshire Mark Masons AGM in July, we are pleased to report increased usage of the Mark Masons Training Centre.

The Centre has been trialed by Hertfordshire St John Ambulance for training purposes, with another booking made for September 2014.

Schools, which have not yet used the Centre, are now being targeted, as the Centre has computer facilities. It will be used for theory based learning, together with the many practical outdoor activities available on site. This will be useful for the disaffected groups, which already use Tolmers with young people who have behavioural issues. They find IT and classroom learning difficult. combined with outdoor activities; attention spans improve when inside the Centre.

With regard to Norfolk Lodge, we are pleased to report a continuing popularity, with residential bookings throughout May, June and July 2014. Weekend bookings have just 4 weekends available before August 2014.

In short, the message is one of sustained success for Norfolk Lodge, and increasing usage and growing success for the Mark Masons Training Centre.